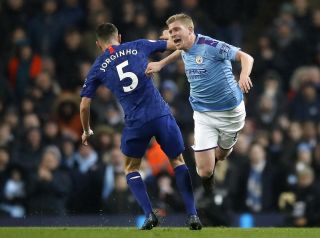 Every Fantasy Premier League manager loves a double gameweek (DGW), but the rare treat comes with its pitfalls too.

The very creation of a DGW is due to the presence of a blank – a week in which a team doesn’t play, usually due to commitments in other cup competitions.

Liverpool have already experienced a double gameweek and a blank thanks to their cup involvements, and four more clubs are about to as well.

Manchester City and Aston Villa’s success in reaching the EFL Cup final at Wembley means their respective games against Arsenal and Sheffield United have had to be moved from gameweek 28.

That gameweek will now be blank for any City, Villa, Arsenal or Sheffield United players you have in your team. Between those sides, there are going to be some managers who wouldn’t be able to field a starting XI currently.

With two gameweeks to go until GW28, many managers will be able to use their free transfers to make sure they get 11 players on the field.

For others, the free hit chip or second wildcard will prove crucial.

How a double gameweek is made

Those blank fixtures have to go somewhere however, and with all gameweeks for the season fixed, that means they’re going to find themselves squeezed in somewhere else.

By consulting the calendar, it is possible to work out when some of those double gameweeks might fall.

As the below graphic shows, for teams with European football to play (such as City and Arsenal) there are only so many dates their rearranged game could take place on – those are marked by empty boxes with green outlines.

With that in mind, tagging City v Arsenal onto the end of GW34 or GW37 looks to be the only option, with international breaks and potential European football leaving no other midweek option.

So we know when a double gameweek is likely to come for Arsenal and City, but how many more teams will have games rearranged?

When will it end?

It’s not just the EFL Cup final that is causing a backlog – with a Premier League team potentially in each of the FA Cup fifth-round fixtures (pending replays) another wave of blanks is predicted in GW31.

Further blanks will likely follow in GW34 when the FA Cup returns in April, which brings more complications. If one of Arsenal or Man City go that deep into the cup, they will be unable to play two league games in GW34 to make up for their lost match in February.

With the traditional top six all still in the competition as well as the Champions League or Europa League, they too may be unable to play a DGW in GW34.

That would leave GW37 as the only option – our advice? Save your triple captain or free hit for that. It could get messy.