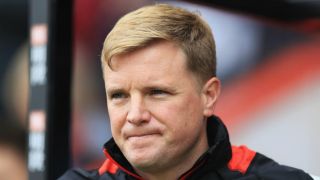 Eddie Howe says the Harry Arter tackle that could have seriously injured Joe Allen in Bournemouth's 2-2 draw at home to Stoke City would have been deemed "outstanding" in the past.

Arter was lucky not to have been sent off by referee Paul Tierney in the first half of the Premier League match at the Vitality Stadium, having lunged in on the Wales midfielder, who escaped unscathed.

While defending the intentions of his player, who got the ball before taking out his opponent, the Cherries' boss did acknowledge Arter could have placed Allen in danger.

"A few years ago that would have been seen as an outstanding tackle but it is a difficult one, I think he got the ball flush but you don't want to see players hurt and I think the referee made the right call," he was quoted as saying by the BBC.

The result left Bournemouth 10th, mathematically safe from relegation and with a third season of top-flight football coming up next term, an achievement the manager was justifiably proud of.

"It means everything to the club to establish ourselves in the Premier League," he said.

"It is an incredibly tough league as we found this year.

"It was a real challenge to break down Stoke but we made it harder for ourselves by twice having to come from behind.

"We have the same points total as last year so now we are looking to beat that and try and finish in the top 10."

. A point today means survival for a second consecutive season. What an achievement for this football club.May 6, 2017

"Disappointed not to win but I thought it was a good performance," he said.

"We had a gameplan to frustrate them and it worked. I think their first goal was offside, and we are disappointed the referee did not see fit to send off one of their players early on in the game. A terrible challenge on Joe Allen, the lad was out of control.

"I felt we were the better side."