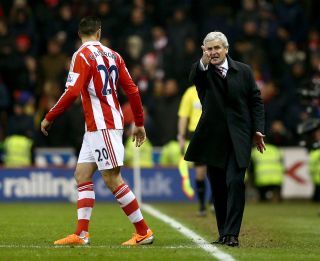 Stoke were left with a mountain to climb when Aly Cissokho's speculative strike deflected in off Ryan Shawcross and Luis Suarez capitalised on errors from Marc Wilson and Shawcross to double Liverpool's side.

Hughes' side refused to lie down, though, and they were level at half-time courtesy of goals from former Liverpool duo Peter Crouch and Charlie Adam.

The game then swung back in the visitors' favour six minutes into the second half when referee Anthony Taylor harshly adjudged Wilson to have upended Raheem Sterling and Steven Gerrard scored from the penalty spot in his 650th appearance for the Merseysiders.

Fit-again striker Daniel Sturridge set up Suarez to make it 4-2 and although Jon Walters pulled another goal back, England striker Sturridge had the final say when he fired home a fifth goal.

It was the first time Stoke had been beaten at home by Liverpool at home in the Premier League and Hughes was frustrated with Taylor's decision to award a spot-kick.

He told Sky Sports: "The penalty decision was really a poor one from the referee's point of view. I don't think it merited a penalty. The lad's gone over too easily, he's looking for a penalty and the referee's bought that."

Hughes also admitted his side only had themselves to blame for defensive errors that proved to be costly.

"We gave ourselves too much to do, unfortunately," he added. "We've gone 2-0 down to a freak deflection and a punt up field which we failed to deal with.

"We showed great character to come back and then got a poor decision against us for the penalty.

"Then we concede a goal we should have done better with, we get one back and then it was another poor goal we gave away. Defensively we made too many errors."