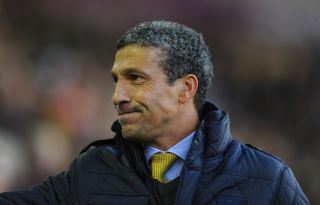 Norwich welcome Swansea City to Carrow Road on Sunday and will be in buoyant mood following the 2-0 win at West Brom last week.

Hughton was under pressure after a 7-0 thrashing at Manchester City last month, but a run of three wins in their last five league fixtures has improved the mood at Norwich.

"The manner in which we won the West Brom game has given us a big lift," Hughton said.

"We are looking at this weekend's game against Swansea as a chance to get back-to-back wins."

"On Sebastien Bassong's new contract, we're absolutely delighted," he added. "The fact he's put to paper shows what the club means to him.

"Ricky van Wolfswinkel has come through his training sessions this week - we'll assess him to see if he can make this weekend's game.

"Robert Snodgrass is making really good progress - he has an outside chance of making the Sunderland game (on December 21)."

And Whittaker is hopeful of repeating the dose after impressing on his return to first-team action last week.

"It was a great win against West Brom and we've had a really good week's training," the Scot said.

"I was keen to impress when coming back in the team last week and thankfully we got a positive result (against West Brom).

"It's nice to score any goal but my one against Swansea last year was a good run and finish."

Norwich last achieved two top-flight victories on the bounce in May, when West Brom and Manchester City were their victims.