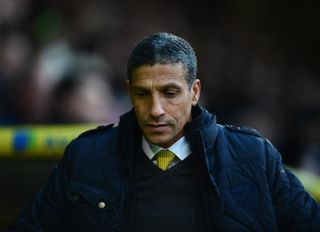 Hughton's men have flirted with dropping into the bottom three in the Premier League and sit a point clear of 18th-placed Sunderland.

Norwich have just six wins in 26 league games and only one in their past 11 heading into the final stages of the campaign.

Bottom side Fulham axed their second manager of the campaign on Friday, replacing Rene Meulensteen with Felix Magath.

McNally said Hughton was aware just what was required from his team to avoid a similar fate.

"All I would assure Norwich supporters is we are watching it very carefully. The whole board is aware of the strength of feeling from the Norwich support," McNally told BBC Radio.

With just 19 league goals, Norwich have the equal second worst attack in the Premier League.