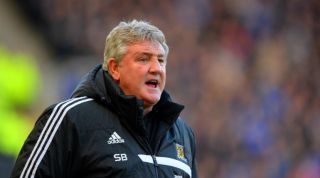 Despite sitting 11th in the table, Hull boast the joint-worst away record in England's top flight, having picked up just five points from 11 games.

Bruce is at pains to point out that the majority of his side's games on the road to date have involved visits to clubs in the top half of the Premier League.

Yet he acknowledges more success is required away from the KC Stadium if Hull are to avoid an immediate return to the Championship.

"I've said repeatedly that we've already been away to all of the top nine, apart from Manchester United, and so it has been a particularly difficult start in that respect," Bruce told Hull's official website.

"But we have to make sure that when we go away from home from now on, we have that mentality that we've shown in our home games.

"Unfortunately, we haven't shown that away from home as yet. We're new to the Premier League and we have to find a way of picking some points up away from home."

Bruce is also hoping to witness a greater attacking threat from Hull following the recent arrivals of Nikica Jelavic and Shane Long.

"We pride ourselves on our defensive organisation, but we can't keep relying on our defenders to keep a clean sheet every week," he added.

"We have to pose a threat at the other end and have the belief to take the ball on and play better. (The game against) Norwich (where Hull lost 1-0 last weekend) was a harsh lesson in that. We made a mistake and the game was past us."