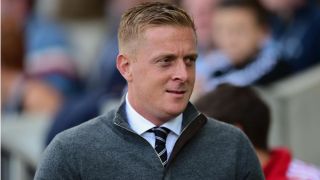 Garry Monk insists Swansea City must be at their best to avoid a League Cup exit at the hands of Hull City at the KC Stadium on Tuesday.

Swansea – victors over York City in round two – were held to a goalless Premier League draw by Everton on Saturday as they failed to bounce back from a first defeat of the season at Watford a week earlier.

And, having rung the changes in Swansea's last League Cup outing, Monk says he will pick the best team for the job this week.

"Hull are a good team. They've started well and they're a strong outfit," he said.

"They've retained a lot of their players from last season, so we're going to have to be on form to go up there and get a result.

"It doesn't matter about who's played and who's not, my team selection will be about who can help us win.

"We want to go there strong and try and win the game. We'll assess the players when we can and then make a judgment on who should be playing and who we're going to take.

"I'm sure there'll be some changes. Whether it is wholesale changes like I did for York, we'll have to wait and see."

Hull lost both their games against Swansea last term as they were relegated from the top tier, but a positive start to life back in the Championship sees them sitting third.

After failing to convince in their League Cup wins over Accrington Stanley and Rochdale, manager Steve Bruce is aiming for his players to play with a higher tempo than they did in Saturday's 1-1 draw with QPR.

"We looked leggy and it became a bit pedestrian," Bruce told the club's official website.

"As I always say, we can play a game of football every day of the week but you can't play them all with the same intensity, that intensity that wins you football matches."