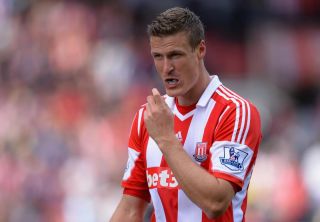 The German sustained a knee ligament injury in a top-flight match versus Sunderland in November last year and subsequently missed the rest of the 2013-14 campaign.

Huth has played in two League Cup matches for Mark Hughes' side this season, but has yet to feature in the Premier League.

After a shaky defensive display in last Saturday's 3-1 defeat at Sunderland, there have been calls for Huth to return to the starting XI when Stoke host Swansea City after the international break.

The 30-year-old is primed and ready should he get the nod.

"I'm great now. There's been no reaction, none whatsoever. It's all good. I haven't missed a training session since we started pre-season," Huth told The Sentinel.

"I don't even consider myself to have had an injury, that's how good it is. I just go to work and train, just like I did this time last year.

"Every player who's not playing is keen to get back into the team, but I'm going to have to bide my time. I am back now though and looking forward.

"There's plenty of games left and hopefully we can get a cup run as well."