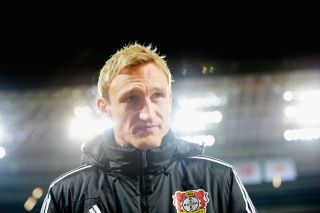 A 61st-minute goal from Marco Russ was all Eintracht needed to record the shock win over second-placed Leverkusen in the Bundesliga.

Hyypia lamented his side's failure to take their chances and praised Armin Veh's men for executing their plans well.

"I think we played a bit too slow in the first half and paid for that. I felt we didn't move around a lot and we looked tired," he said.

"Frankfurt's game plan made it really tough for us too. We couldn't find any opportunities to create dangerous situations up front. The biggest disappointment was we were not able to play our game in the first half.

"However, it was a much better performance in the second half. We started to show more of what we have done for the past few weeks, we had chances to score a goal.

"The frustrating thing is we conceded the goal in a phase where we were actually playing well. When we were behind in the game, we had some great chances to equalise.

"But it's common in this game, if you can't score, you can't win a game, that's how simple it is."