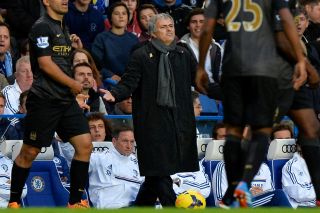 Chelsea striker Fernando Torres profited from a gaffe by City goalkeeper Joe Hart to seal a last-gasp 2-1 victory and delight the Stamford Bridge crowd on Sunday.

Mourinho celebrated the goal in the section of Chelsea supporters behind the visiting dugout and City manager Pellegrini neglected to wait for a full-time handshake.

Asked about Mourinho's actions in a terse press conference, Pellegrini replied: "I don't expect a different way to celebrate from him. It's normal.

But Mourinho explained he went to celebrate the goal with his son, pinning the blame on Chelsea for allocating his season ticket behind the away bench.

"This is the drama of the last minute. I beat Manchester City in the last minute with Real Madrid (3-2 in last season's UEFA Champions League), I slid on my knees and I destroyed my trousers.

"If they (City) believe that my son is there, great. If they don't believe, I apologise if they feel I did something wrong."

Mourinho also had no problem with Pellegrini's decision to go down the tunnel following the whistle, claiming he rarely engaged in post-match pleasantries during his time at Real Madrid.

"He lost the game in the last minute, and I have sympathy with that," he said.

"In other cultures and other countries we shake hands before the game and that's enough. At the end of the game we don't.

"In Madrid, normally I never did it so I don’t feel it is a lack of respect.

"If he was sad because of the result I understand, if he was sad thinking I did something wrong, I accept that too, so no problem."