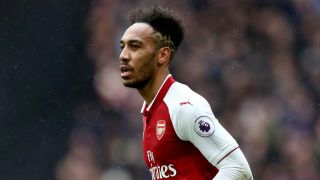 Pierre-Emerick Aubameyang has vowed not to change his extravagant lifestyle regardless of what the outside world may think of it.

Aubameyang left Borussia Dortmund for Arsenal on transfer deadline day, completing a £56million move to the Gunners, who he will attempt to fire to victory against Manchester City in Sunday's EFL Cup final.

The Gabon international has often attracted as much attention for his expensive cars and other outlandish purchases as much as his undoubtedly impressive play on the pitch.

But that does not both Aubameyang, who told The Daily Mirror: "The clothes, the cars and all that are a bonus. I enjoy living this way.

"I like who I am and it doesn't matter if other people can't accept that – it goes over my head.

"As they say 'you only live once'. It's important to know where you come from and where your roots are – the rest is a big bonus."

Though he enjoys the obvious off-the-field benefits of being one of the best footballers on the planet, for Aubameyang, his career remains about following in his father Pierre 'Yaya' Aubameyang's footsteps and fulfilling a dream.

"When I was kid I would go to the stadium to watch my dad Pierre play when he was at Le Havre, Toulouse, Nice and Rouen," he said.

"It was incredible. After his matches I would play on my own in the living room.

"I'd mimic the fans and then give interviews just like I do today! I am living my childhood dream. I think that is something magnificent for a child like me."