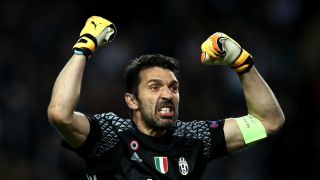 Gianluigi Buffon hopes to exorcise the demons of two painful Champions League final defeats with Juventus by finally winning the competition for the first time in his illustrious career.

The veteran goalkeeper played a key role in Juve's 2-0 semi-final first-leg win in Monaco, making five saves as Gonzalo Higuain struck twice at the other end, with a meeting against Real Madrid in the decider now seemingly inevitable.

The Bianconeri set a club record by recording their sixth successive clean sheet in the Champions League with that victory and Buffon is keen to make up for the disappointment of losing finals to AC Milan in 2003 and Barcelona two years ago.

"There's definitely a desire to make up for losing the [2015] final in Berlin, but I also have to make amends for Manchester in 2003, so going back through the years my motivation is a lot deeper," Buffon told UEFA.com.

"In 2015, we lost it at a moment when Barcelona were on the ropes. We let in a goal almost on the counter-attack: [Lionel] Messi hammered a shot on goal, I diverted it and [Luis] Suarez scored.

"Losing on penalties in 2003 was very painful, but since I was only 25, I was fairly calm because I was convinced I'd win many more. That's the exuberance of youth. I was so close to winning it on that occasion; they missed three penalties in that final - I saved two of them. Strange things happen. It wasn't meant to be and we weren't good enough. In sport and life, those who deserve it more probably end up getting their rewards.

"After the return leg [in the quarter-finals] against Barcelona this season I was very happy, of course, but I did not celebrate too much, because I know that after a certain point you either win the trophy or get disappointed. And since I have been disappointed so many times, I want to get the victory before allowing myself to celebrate.

"It would mean a lot for me. It would be the greatest joy of my career, together with the [2006] World Cup, because it would almost be a reward - the end of a very difficult road paved by bravery, stubbornness and hard work. I have always wanted to win it and I have always been convinced that I can do it together with my team, the fans, my colleagues. That would be great."

Monaco wonderkid Kylian Mbappé in the this season.  May 8, 2017

At the age of 39 Buffon is coming towards the end of his career, but the Italy international is enjoying testing himself against the next generation, including Monaco's brilliant teenage striker Kylian Mbappe, who is 21 years his junior.

"Mbappe was born in December 1998 - I had already played at the World Cup in France by then," added Buffon, who is expected to make his 150th UEFA competition appearance in Juve's semi-final second leg against Monaco on Tuesday.

"That's the nice thing about having such a long career: meeting kids who weren't even born when you already had a chunk of your career under your belt.

"I was thinking the other day that I've managed to span almost three generations. When I started playing, you still had guys born in the end of the 1950s and the 1960s – and I'll finish with guys born in the 2000s. It's a huge span of time.

"It's nice knowing that I'm playing with the future Messis, Cristiano Ronaldos and Neymars, because in 10 years, after I have been retired for a while, they will be confirmed superstars and I'll remember facing them at the dawn of their careers."