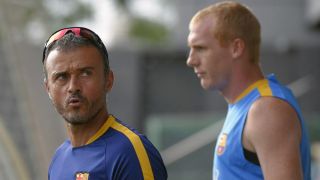 Barcelona defender Jeremy Mathieu has revealed that he turned down an offer from Besiktas in order to fight for his place at Camp Nou.

The Turkish champions announced the signing of full-back Adriano on Friday for a fee that could reach €1.7million.

Competition for places in Barca's defence has intensified with the signings of Samuel Umtiti and Lucas Digne, prompting speculation that Mathieu could also opt to move elsewhere.

But the France international, 32, says he rejected an offer to follow his former team-mate out of Camp Nou, even though he is aware of the difficulty of finding a place in Luis Enrique's first team.

"It's true that I've had contact, but I told the president that I was very happy here and my intention is to continue," he said after Friday's training session at St George's Park, as quoted by Mundo Deportivo.

"Umtiti and Digne are friends of mine, and my team-mates. It's true that they are players who play in my position, but I won't have any problem.

"Luis Enrique already knows that I prefer to play as a centre-back, but in football you can never say what will happen."