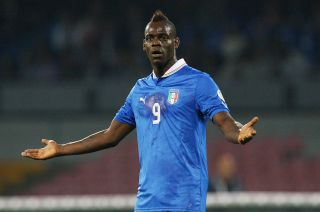 Maradona was almost unrivalled for his ability on the field, scoring more than 300 goals in an outstanding career for both club and country.

Revered in Argentina for helping his nation to the 1986 FIFA World Cup, Maradona suffered issues with alcohol and illicit drugs, while he was also the subject of non-stop media attention.

The talent of the 23-year-old Balotelli is undoubted but he has had a string of disciplinary issues plague his career to date.

Speaking at a question and answer session in Milan, Maradona revealed he had grown fond of Balotelli and wished to mentor the striker.

"My first contact with Mario was him sending me a picture of him smoking a Cuban (cigar). I loved it! I laughed," Maradona said.

"(Everyone needs to) leave him in peace. I would like to talk to Mario on our own, in a room, and explain to him all the bad experiences I had."

Balotelli moved from Manchester City to Milan in January and has scored 17 goals in 21 appearances for the Serie A outfit.