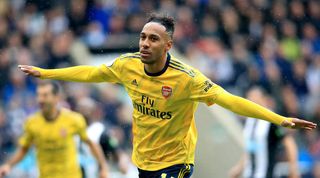 Ian Wright believes "world-class" Pierre-Emerick Aubameyang should be challenging for the biggest trophies.

The Arsenal striker has scored 17 goals in the Premier League this season and another three in the Europa League.

His future is in doubt, however, with the Gabon international set to be out of contract in summer 2021.

Aubameyang has been linked with a move away from the Emirates Stadium, with Barcelona thought to be among the interested parties.

Arsenal are unable to qualify for the Champions League through the Europa League having been knocked out by Olympiacos in the last 32.

Mikel Arteta's side are currently eight points adrift of the top four with 10 games remaining, and Wright believes there is a good chance Aubameyang will look to move on this summer.

“If you can imagine him in a better team, he would be winning Premier Leagues and vying for places in Champions League finals and I think he deserves that," he told Premier League Productions.

“You don’t see him particularly vocal on the pitch, [no] pointing and screaming, but it’s what he does in respect of his leadership with the goals that he scores.

“If you take his goals out of that team then they’re in a massive heap of trouble. Arsenal need a few more players to kick in with their form to help him.

“We’re talking about a goalscorer who is scoring at the rate of a Champions League player, a world-class goalscorer.

“We’re talking about the last big contract in his career. I just hope that the love that he has for the club and the fans have for him is enough for him but I wouldn’t want to be in his position because it’s a tough one for him.”

Arsenal's meeting with Brighton this weekend has been postponed after Arteta was tested positive for coronavirus.