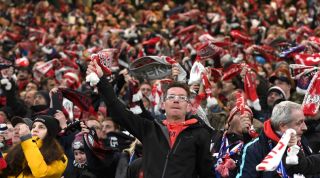 German football smells of beer, wurst and the occasional plume of cigarette smoke. Those were the fragrances wafting through the high concourses of the Red Bull Arena on Tuesday night, before, during and after RB Leipzig’s comprehensive win over Tottenham.

It was difficult to know what to expect from that evening. Leipzig is a city with a distinguished footballing past - Lokomotive Leipzig reached the Cup Winners’ Cup final in 1987 – but RBL have no claim at all to that history. They are the continent's most notorious marketing construct and that's a charge against which they have absolutely no defence.

ALSO READ RB Leipzig: Widely reviled in Germany, here's how one of the most exciting projects in Europe is being built

It's a strange place, too. In its most modern parts, it's deeply beautiful. It's decorated with ornate churches, elegant sculptures and fascinating architectural flourishes. At its most stark, though, it's really quite bleak. The sky almost changes as you walk from the centre to the east; all of its colour drains away. The tram stops become fewer and further between, too, as concrete tower blocks stand on guard in the grey.

Outside the main railway station, there’s an underpass which leads pedestrians into town. In amongst the graffiti on its walls are the first reminders of what football thinks of this place. The protest stickers presumably don't last for long, but a few have survived since whichever visiting fans were here last and they're enough to condition you against what you’re about to experience.

The stadium is also an oddity. It lies within the skeletal remains of the old Zentralstadion, a multisport arena built back in the 1950s. The cocoon effect is bizarre. The arena itself is modern, that was built in the late 1990s, but it’s fronted by a nondescript building. From the outside, it looks like a book depository or an archive full of Cold War secrets. It's bland but imposing, with harsh outlines which are lit by the floodlights behind.

Inside, it’s different. It’s more than 20 years old now, but it's loud and atmospheric and still relatively modern. The tiers steeple into the sky and even though the stands are set back from the pitch, the fans loom high over the players and their noise is walled in. It's cold on Tuesday night. The rain is spitting and snarling too. But scarves are being whipped around heads, the PA is booming and only a few of the 43,000 seats aren't occupied as the game kicks off.

Where did all of these people come from, though?

What were they all doing before 2010?

RBL are an excellent side and Julian Nagelsmann will one day be the coach of his generation. That in itself pulls people through the turnstiles and hearts and minds have been won with less. But it’s still hard to understand. This a team without even a decade’s worth of history, so how does a common cause grow so quickly - how is there order here, instead of just blank expressions and the sound of gentle applause?

Perhaps it was naïve to come expecting to find symbols of cynicism. To imagine an army of blue and red uniformed helpers handing out cans of Red Bull, or some daredevil parachuting the matchball in from Jupiter. Instead, it’s interesting how absent the insignias actually are and how unbranded the matchdays seem to be. Almost certainly that’s by design, a familiar tactic in any soft sell, but the only giveaway is a literal red bull mascot which, with its cartoon horns and a ring through its nose, prances about to entertain the younger children.

In the south stand, a capo bellows into his megaphone and conducts the atmosphere. The crowd are into it, too. The singing, but also the occasion. It’s RBL’s first-ever Champions League knockout game, so the senses are especially sharp, but if this is typical then it’s impressive – desirable, even.

Tottenham are absolutely useless on the night and the tie is over within half an hour. With the home fans in full voice, the mind drifts away from the football and to the experience. There are synthetic moments, but they’re not particularly intrusive. The scarf waving would antagonise the pious, no doubt, and so would some of the flags, but that's really true of anything other than standing in silence, muttering about how everything's changed.

Like a lot of European grounds, the Red Bull Arena does call-and-response especially well. It’s not quite Decibel Bellini at Napoli, but RBL’s man has a full range of inflections and growls and he stokes the crowd while manically pacing the area behind the dugouts. It wouldn't work in England, it would be horribly naff actually - everyone doing it would sound like the Wembley pitch announcer - but it's part of the spectacle and it keeps the fans alive well after the result has been decided.

There are other cultural differences here, too, and they're not hard to spot either. One night of German football does not equate to an oversight - obviously not - but people seem to be enjoying themselves a bit more than they do in England. Or, at least, they appear to carry themselves more lightly. Fans drink their pints happily and nobody seems especially bothered by the smoking. The Tottenham fans are on the other side of the ground, in a small pocket in the far corner, but the few with tickets in the home stands walk about happily enough, with their crests and colours showing, and their misery growing darker throughout the night.

That isn’t really about RB Leipzig specifically, more German football as a whole. Maybe it’s simple: treat people well and their attitude will – in almost all cases – be calmer and more benevolent as a result. By contrast, prejudge them and treat them like animals, and they'll play down to that expectation. There's a lesson. And one which English football will never, ever learn.

These supporters like a drink. On the way back into town after the game, one overweight fan with a hat pulled almost over his eyes staggers towards a tram which is creeping away from its stop. Just in time, though, a friend retrieves him, guiding him back to the pavement. They both disappear into the night and that's the closest the evening comes to any sort of controversy.

The locals have seen their team win, so of course they’re bouncing cheerfully back to their houses, but being among them as they flow through the streets still feels different. It’s very difficult to explain why or to even describe what that means. This was a night’s football which was louder, but still somehow gentler. There's no aggression. It was played out in an environment where fans weren’t charged a fortune, weren’t treated badly once they were inside and didn’t carry an underlying resentment or hostility as a result.

They had their sausages and beer, sang their songs, and then they went home on their excellent travel links. It was hard not to be envious.

You come here ready to hate it. On the basis of what RB Leipzig stands for and what kind of precedent their beginnings set, that’s probably the right response. But – dishearteningly – even with the lack of history and transparent agenda, this is still just another place where football seems to work better than it does at home.

INTERNATIONAL UEFA Nations League explained: Everything you need to know about the new format