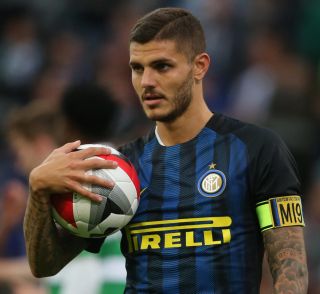 Mauro Icardi and Henrikh Mkhitaryan were among the major movers on Europe’s transfer deadline day, but Neymar, Paul Pogba and Christian Eriksen all stayed put.

The French champions, who also signed Real Madrid goalkeeper Keylor Navas for an undisclosed fee – Alphonse Areola moved in the opposite direction on loan – have the option to make Icardi’s transfer permanent next season for £59million.

Arsenal midfielder Mkhitaryan, who moved to the Emirates Stadium in January 2018 from Manchester United, has joined Roma on loan for the rest of the season.

Icardi, Inter’s top goalscorer for each of his five seasons at the club since joining from Sampdoria in 2014, had been expected to leave this summer.

He was stripped of the captaincy in February during extended contract negotiations and did not travel with the club on their summer tour to Asia following a fall out with boss Antonio Conte.

PSG are determined to mount a stronger challenge in the Champions League this season and Icardi will further strengthen their strikeforce, which already includes Neymar, Kylian Mbappe and Edinson Cavani.

Neymar’s hopes of returning to Spain came to nothing. The world’s most expensive player has made clear his desire for a move back to Barcelona, who signed him from PSG for £198m in 2017.

Attempts to clinch the Brazilian an initial loan move back to the Nou Camp, which, according to reports, would have included Ivan Rakitic, Jean-Clair Todibo and Ousmane Dembele as makeweights, collapsed after PSG failed to convince Dembele to make the move.

Pogba’s desire for a fresh challenge with Real Madrid also came to nothing in the current transfer window, but speculation over his future will rumble on.

The French World Cup winner has infuriated United fans by ‘liking’ a post from a fan on his Instagram account on Monday night urging him to go to Real Madrid.

Tottenham playmaker Eriksen, in the final year of his contract, has expressed his disappointment at failing to seal a move after revealing in the summer that he too wanted a new challenge.

There was reported interest from Real Madrid, Juventus and PSG, but Spurs received no bids for the Denmark international.

Llorente was signed on a free transfer by Napoli and Darmian joined Parma for an undisclosed fee.

Liverpool youth-team striker Bobby Duncan, 18, completed a permanent move to Fiorentina, who have paid two million euros (£1.7million) up front with a 20 per cent sell-on fee for the player, the PA news agency understands.

Rangers beat the midnight deadline to sign Liverpool winger Ryan Kent for a fee which could rise to £7.5million.