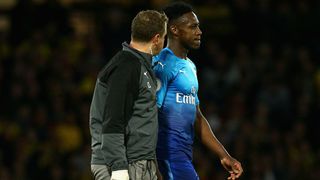 The former Manchester United attacker has been plagued by injuries over the last two-and-a-half years, managing just 33 Premier League appearances since the start of the 2015-16 season.

Six of them have come this season and Welbeck boasts a decent record of three goals from those limited outings, although he has also suffered two groin strains which have interrupted his season.

Southgate seems determined to only pick players on merit after refusing to call up Welbeck's team-mate Jack Wilshere for the international friendlies against Germany and Brazil, highlighting the midfielder's lack of playing time as the reason he was overlooked.

But Wenger feels that Welbeck – who is expected to play for the first time since October on Thursday against Cologne – should be considered a certainty for the World Cup if he can stay out of the treatment room.

"For me, he is a striker who has top physical qualities," Wenger told reporters ahead of Arsenal's Europa League trip.

"He is a team player as well. He is a top-class striker and on top of that he is loved by everybody in the squad.

"If he is fit, he will go to the World Cup, I'm convinced of that."

Welbeck is likely to feature in some capacity when Arsenal travel to Germany looking to secure top spot in Group H, but regardless of whether he starts or not, Wenger revealed that he will be picking a strong XI.

The boss has arrived for his pre-match press conference…"The north London derby win has helped lift the confidence but it's behind us now. We're focused on finishing top of the group tomorrow."November 22, 2017

He said: "The north London derby win has helped lift the confidence, but it's behind us now. We're focused on finishing top of the group tomorrow [Thursday].

"You will see a very experienced team and see that every player has a big experience in the Premier League."