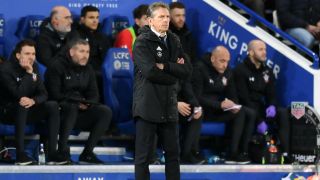 Claude Puel offered no comment when asked about his future after Leicester City slumped to a disappointing home defeat against struggling Southampton on Saturday.

The Foxes lost 2-1 at the King Power Stadium despite playing against 10 men for nearly an hour, with the result coming less than a week after their embarrassing FA Cup exit at the hands of fourth-tier side Newport County.

Some fans aired their frustration with boos at the full-time whistle, yet Puel is unconcerned by the criticism and instead has made clear his desire to carry on in charge.

Leicester have lost three of their four outings since upsetting reigning champions Manchester City on December 26, while they have daunting fixtures against Liverpool, Manchester United and Tottenham to follow on from next weekend's trip to Wolves.

"It's not my concern, no comment. I'm just focused and concentrating on my team," Puel told BBC's Match of the Day show.

"I want to work with these players. It's football. The fans are like us - disappointed and frustrated."

James Ward-Prowse opened the scoring with a penalty and while Southampton had defender Yan Valery dismissed in the 45th minute, they doubled their lead before the break with a first-half stoppage-time goal from Shane Long.

Wilfred Ndidi halved the deficit in the 58th minute but the visiting Saints held on to their slender advantage, leaving Puel's position firmly in the spotlight after losing to one of his former clubs.

On the result, he added: "It's a big disappointment. We wanted to give a good response after the FA Cup against Newport.

"It's difficult to accept the second goal we conceded. We had a lot of chances and opportunities. It was important to try and manage this game with intensity in our passes. It was difficult to be clinical and maybe we needed a bit more movement in the box."

Opposite number Ralph Hasenhuttl was able to reflect on what he described as a "fantastic win", with the three points lifting Southampton out of the relegation zone.

"It’s a fantastic win," Hasenhuttl told the club's website. "It can be a very important one because we showed that we act as a team with fantastic commitment. That’s what I want to see.

“We showed today more of our potential that we have to bring to excellence, which is the step we want to go to. It’s only possible with hard work and we had a very good week ahead of this game.

"Now I think we have made a very important step but only one, the others have to follow."