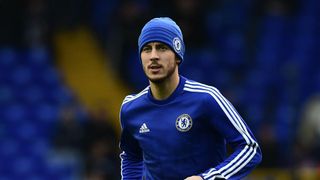 Chelsea manager Guus Hiddink has challenged Eden Hazard to recover both mentally and physically in a bid to rediscover his best form.

Amid a woeful Premier League title defence that has seen Jose Mourinho replaced by Hiddink, Hazard's individual form has also suffered, with the Belgian having failed to score for his club this season.

Hazard - last year's PFA and Premier League Player of the Season - will miss Wednesday's visit of West Brom with a niggling groin problem and Hiddink is eager for the Belgian to be back among the first-team squad.

Asked whether Hazard needed an arm around his shoulder, Hiddink responded: "I'm not his mother, they get proper attention. They all have an individual approach. One needs a lash, another needs an arm.

"Another one needs to be pinched a bit. It's different but we give him time to come back to his level.

"For me it's about freshness. If your mind is fresh and players are eager to step up and enjoy training that's a signal of freshness.

"He has won trophies but this season he has had some physical problems. Yesterday was the Ballon d'Or and you see the freshness of the players who win the Ballon d'Or - they are playing like youngsters.

"That's what we are aiming for with him. He has to enjoy it and get rid of the physical problems then he will come into his normal shape.

"I think for the Ballon d'Or, you have to establish yourself over more seasons [than just one]. Hazard is capable in the future but there are other demands."

Diego Costa is set to shake off a knee problem to start at Stamford Bridge on Wednesday while Loic Remy could feature in the squad following a calf injury.