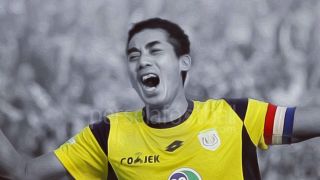 Indonesian goalkeeper Choirul Huda has died at the age of 38 following a collision with a team-mate, his club Persela Lamongan have confirmed.

Huda collapsed after a coming together involving Persela team-mate Ramon Rodrigues in a match against Semen Padang in Liga 1, the top division in Indonesia.

Dr Nugroho added that the initial analysis showed the "possibility of head trauma and neck trauma", while the collision caused a "cardiac arrest".

The match was completed, with Persela winning 2-0.

In a post on the club's official Instagram, Persela paid tribute to one-club man Huda, writing: "Thank you for the inspiration you gave to Persela, Lamongan and Indonesian football."