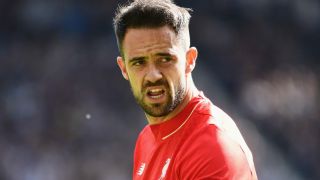 England forward Ings, who missed the majority of last season with a cruciate knee ligament injury, scored in a 1-0 win over Tranmere Rovers earlier this month and broke the deadlock with 19 minutes remaining at the DW Stadium on Sunday.

Highly rated 16-year-old Woodburn then doubled the advantage for Jurgen Klopp's side, having also got on the scoresheet in a 5-0 win over Fleetwood Town earlier this week.

Philippe Coutinho was the game's outstanding performer during the first half and the Brazilian playmaker whipped a fifth-minute free-kick against the crossbar with Wigan goalkeeper Lee Nicholls rooted to the spot.

Nicholls was similarly helpless when Coutinho cut inside to rattle his near post but his opposite number almost gifted Wigan a 31st-minute lead.

Loris Karius allowed a backpass from fellow new recruit Joel Matip to slip under his foot, although he recovered to desperately charge down Sanmi Odelusi as the Latics forward looked to convert the loose ball.

A majestic pirouette from Coutinho set up Sadio Mane to test Nicholls before the break and Ings – one of eight players introduced at half-time by Klopp – drew a sharp low save in the 50th minute.

Ings collected a delicate pass from Lazar Markovic to finish high into the net and Woodburn slotted home Ryan Kent's throughball three minutes later to seal victory by the same scoreline by which Manchester United beat a Latics XI on Saturday.

Matip limped off towards the end of the match to sound a note of concern at the end of a largely satisfactory outing for Klopp's squad.