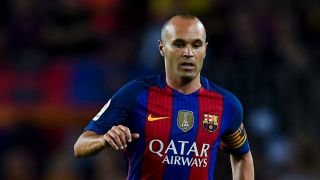 Andres Iniesta has refused to blame Javier Mascherano for Barcelona's 2-1 surprise defeat at the hands of Alaves on Saturday.

The Argentine was at fault for Alaves' second goal as his poor clearance allowed Ibai Gomez to restore his side's lead, but Iniesta leapt to the defence of his team-mate.

"Football is all about success and mistakes. What happened to Mascherano could have happened to anyone," Iniesta told reporters.

"It was one of those games where nothing came off. We didn't do things well and we've paid with a defeat and the loss of three important points.

"Of course this has been a bad performance, but now it's about analysing the causes and correcting the errors.

"You have to be patient.  We're at the beginning of the season and there's a long way to go.

"Each game has its own story. We have to analyse why Saturday's result occurred, but this should not affect us in the Champions League against Celtic."

Barcelona face the Scottish champions at Camp Nou on Tuesday in their Group C opener.