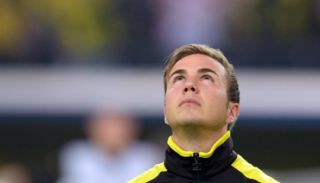 The versatile 20-year-old German international, who will join Bayern next season, was injured in the second leg of the semi-final against Real Madrid on April 30 and had been battling to get fit for the final at Wembley.

"That final was my goal, I've struggled hard to be fit in recent weeks and I am incredibly sorry for not being able to help the team in this important game," Gotze said on the Dortmund website.

"I will of course travel to London to support the guys," said the talented player, who had joined team training on Tuesday in a last-ditch effort to be fit for the game.

His coach Jurgen Klopp had earlier in the week sounded upbeat about the midfielder being fit.

Gotze is likely to be replaced by fellow Germany international Kevin Grosskreutz who would move to the left wing with Marco Reus shifting back into the middle. Klopp could also opt to move Ilkay Gundogan behind forward Robert Lewandowski and introduce Nuri Sahin as a holding midfielder.

Gotze stunned his colleagues and fans when it was announced last month, before Borussia and Bayern had even qualified for the Champions League final, that the Dortmund youth academy product was joining bitter rivals Bayern next season for 37 million euros.

That raised the unusual prospect of him playing against his new club in the final, but the injury has ended that possibility while also putting a dent in Dortmund's preparations for the final.