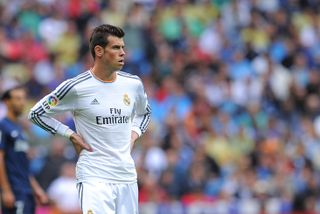 The Welshman returned to action as a late substitute in the 2-0 victory over Malaga following a three-week spell on the sidelines.

Reports in Spain suggested that Bale had suffered a slipped disc and could require surgery, which would see him out of action for several months.

Real denied those claims, revealing in a statement that the 24-year-old had a "small chronic disc bulge" - a much more common and less serious complaint.

And with Saturday's cameo appearance under his belt, Bale was able to make light of the rumours that surfaced during his time in the treatment room for a thigh injury.

"Everything was blown out of proportion massively, it was just a little thigh strain," he told Real Madrid TV.

"I think the fact that I haven't had a lot of game time and a lot of pre-season games, or training or running, you always pick up little niggles."

The victory over Malaga saw Carlo Ancelotti's side close the gap on the top two, with Barcelona and Atletico Madrid both dropping points.

Bale was introduced in the closing stages, with the hosts already leading though Angel di Maria's strike, and he won the penalty from which Cristiano Ronaldo added the second.

"It was massively important for us to get the win," Bale added. "It's great to get back on the pitch, get a few minutes under my belt, and make a good impact."

Next up is the visit of Juventus in the UEFA Champions League on Wednesday, before the latest instalment of El Clasico at Camp Nou on Saturday, and Bale is relishing the prospect.

"I'm looking forward now to the next two big games," he said, before admitting that he may not be handed a starting berth in either clash.

"I have to take it one step at a time, obviously. I haven't had too much training or games. It's all about building me up now.

"I will do what the manager says but I just need to prepare myself right for the rest of the season."