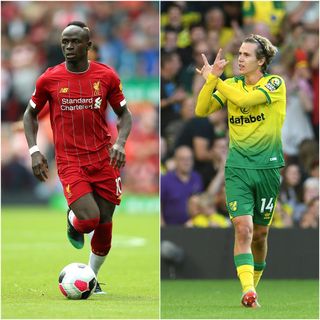 The champions had last lost in the league in January – a 2-1 reversal at Newcastle – but the Canaries were in inspired form to deny Pep Guardiola’s side.

Norwich, who were without seven players and could not call on City loanee Patrick Roberts, took the lead in the 18th minute.

Kenny McLean headed home a corner at the near post and the Canaries were soon 2-0 up when Teemu Pukki teed up Todd Cantwell to tap into an empty net.

City, who are already five points behind leaders Liverpool with just five games played this term, got themselves back in the game before half-time when Sergio Aguero nodded home Bernardo Silva’s cross.

Yet the visitors’ disastrous day took another turn when Nicolas Otamendi lost possession 20 yards from his own goal, and Emiliano Buendia set up Pukki to add a third in the 51st minute.

City pressed a resolute Norwich defence for the remainder of the game, finding an 87th-minute consolation through Rodri, but the hosts held on for a famous victory.

Sadio Mane struck twice as Liverpool came from behind to maintain their 100 per cent start with a 3-1 win over Newcastle.

Jetro Willems stunned Anfield by firing Steve Bruce’s side into an early with a brilliant strike but the Reds responded in style.

Mane netted twice before the interval and Mohamed Salah added the third after an exquisite piece of skill from the outstanding Roberto Firmino, who had started on the bench.

The victory was Liverpool’s fifth in an impressive start to the league season while the Magpies remain on four points with just one win so far this term.

Tottenham returned to winning ways with a resounding 4-0 victory at home to Crystal Palace.

Son Heung-min opened his account for the season in the 11th minute, collecting Toby Alderweireld’s long ball and firing into the bottom corner.

Erik Lamela got in on the act before the break when he converted Harry Kane’s cross and there were no further goals in the second half.

Spurs move up to third, level on points with fourth-placed Manchester United who beat Leicester 1-0 at Old Trafford.

The hosts won a penalty in the seventh minute when Caglar Soyuncu brought down Marcus Rashford and the United forward sent Kasper Schmeichel the wrong way from the spot.

Rashford also struck the woodwork in the second half while Harry Maguire, an £80million signing for United in the summer, kept a clean sheet against his former side.

Tammy Abraham continued his fine form with a hat-trick in Chelsea’s 5-2 win at Wolves.

The Blues opened the scoring in the 31st minute through an unlikely source when centre-back Fikayo Tomori fired in a stunning curling effort from 25 yards.

Abraham then made it 2-0 three minutes later with a clever shot on the turn before notching his second of the day with a 40th-minute header.

The England forward then made it seven goals in his last three games with a composed finish 10 minutes after half-time.

Abraham was then credited with an own goal in the 70th minute and Patrick Cutrone pulled another goal back for Wolves with five minutes left.

Mason Mount had the final say for the Blues, though, with a curling effort in added time.

Jeff Hendrick stepped off the bench to equalise late on as Burnley picked up a 1-1 draw away at Brighton.

Neal Maupay broke the deadlock in the 51st minute when he volleyed home Solly March’s cross from 12 yards.

The Clarets refused to lie down, though, and Hendrick – on as a 59th-minute substitute – rifled in from 25 yards in the 91st minute to earn a share of the spoils.

Blades forward Oli McBurnie had a goal ruled out by VAR at the start of the second half and they were made to pay when Djenepo put the Saints ahead with a stunning solo goal in the 67th minute.

Billy Sharp was then sent off for United with five minutes remaining on a frustrating afternoon for the hosts.