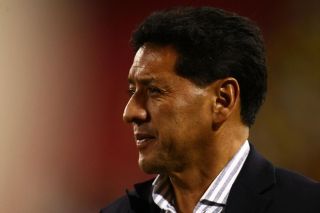 Former head coach Rueda led Ecuador to their third appearance in a World Cup finals earlier this year, but was unable to prevent elimination at the group stages.

Ecuador were the first South American team to be knocked out of football's showpiece tournament, having lost to Switzerland, beaten Honduras and then drawn with France in their three Group E matches.

The decision to remove Rueda was subsequently taken in July, with former national team coach and current under-20 boss Sixto Vizuete placed in interim charge until at least January when the Ecuador Football Federation (FEF) will hold a presidential election.

Vizuete - who previously coached Ecuador between 2007 and 2010 - has retained 15 members from the squad that travelled to Brazil for the Bolivia clash.

Star duo Jefferson Montero and Antonio Valencia, of Swansea City and Manchester United respectively, asked not to be selected this time around, although Vizuete expects the pair to return in the future.

Midfielder Segundo Castillo returns to the fold after suffering the heartbreak of missing the World Cup when he damaged his anterior cruciate ligament in a 3-1 reverse to Mexico in May.

Castillo is the most capped player in the squad and remains fully committed to giving his all for the team.

"There have been a few years of [representing Ecuador] but each call is a new feeling, a new challenge, there is always desire to do [my] best," he told the FEF's official website.

"Every player dreams of being selected for his country and we reach that goal we know that commitment is very high, in the country, with the fans and with ourselves."

Vizuete could hand international debuts to the likes of Juan Cazares, Angel Mena and Arturo Mina, while Real Salt Lake's Joao Plata could add to the solitary cap he earned in 2011, the forward rewarded for scoring 11 MLS goals this term.

The fixture with Bolivia at the Lockhart Stadium offers both teams the chance to run the rule over their squads as preparations step up for next year's Copa America in Chile.

Bolivia are aiming to snap a poor run of form that has seen them fail to win in their past 11 matches, a 2-1 victory over Haiti in February 2013 representing their last success.

Head coach Xabier Azkargorta has named a 20-man squad for the double header with Ecuador and Mexico, but strikers Juan Carlos Arce and Marcelo Moreno Martins will not feature. Arce is ruled out with a knock while Martins asked to remain with domestic side Cruzeiro.

Mario Ovando of Bolivian side San Jose earned his first call-up and is eager to shine, stating: "I am very happy with this opportunity, I think it's a reward for the I work I have been developing at my club."