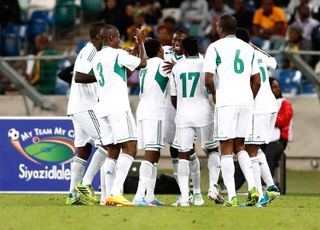 The VVV Venlo striker was part of a triple attacking substitution by coach Stephen Keshi at the break - and within four minutes he had proved his class, producing an audacious backheel to open the scoring before wrapping up the win with a close-range finish after 68 minutes.

In truth, Nigeria were far superior as they completed a fifth consecutive victory over their hosts.

But South Africa can still take some heart from their performance in the Nelson Mandella Challenge - played in honour of the ailing 95-year-old former South African president - with midfielder Reneilwe Letsholonyane in particular catching the eye.

John Ogu replaced injured Chelsea star John Obi Mikel while there was also a place in Keshi's side for Sunday Mba.

Bafana Bafana were without Genk's Anele Ngcongca, who is at the centre of a club versus country row after the Belgian outfit refused to release him, citing an injury.
Following a cautious opening, it was the Super Eagles who seized control.

Braga full-back Elderson Echiejile was the first to threaten as he raced down the left flank, but his finish was woeful as he blazed high into the stands.

The visitors were then denied by the woodwork after 27 minutes as Ogu thundered an effort from outside the box that smashed back off the crossbar.

It looked to be only a matter of time until Nigeria grabbed the advantage, although they were almost caught on the counter when Bernard Parker's cross flashed across the box and a sprawling Siphiwe Tshabalala just failed to connect.

The lively Ogu threatened again 11 minutes before the break with another long-ranger that swerved viciously in the air before, at the other end, South Africa were dangerous from out wide when Parker cut in from the left and angled a ball into the path of Letsholonyane, whose shot was blocked.

Nigeria showed their hand at the break, with Keshi making his triple change, sending on Nwofor, Victor Moses and Ahmed Musa in a clear effort to force the pace of the game.

It worked almost instantly too, as just four minutes after entering the fray Nwofor found himself in space in the area and produced an exquisite bit of skill to backheel the ball beyond goalkeeper Itumeleng Khune.

Letsholonyane responded with a drive that flashed wide, but Nwofor was at it again after 68 minutes, doubling his tally from close range after Musa and Moses had worked the space to dissect the South Africa defence.

With time running out, Bafana threw everything into their search of a response, and Letsholonyane almost gave them a foothold when he broke clear only to produce a weak finish.

It perhaps should have been even worse for the hosts when Musa was released in space down the right in the final minute. His shot flashed across goal, but it mattered little as the Super Eagles had already done more than enough to emphasise the gulf in class.