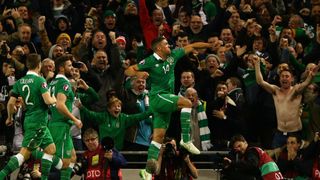 Jonathan Walters paid tribute to the work of manager Martin O'Neill and his assistant Roy Keane after firing Republic of Ireland to Euro 2016.

Stoke City forward Walters scored a first-half penalty before meeting Robbie Brady's excellent delivery to squeeze home the second in a 2-0 win in Dublin as Ireland wrapped up a 3-1 play-off success.

Walters refused to take all the credit, though, choosing instead to spread the praise across the team and reserving particular acclaim for O'Neill and Keane – who qualified for a major tournament at the first attempt having taken over in November 2013.

"The whole team on the pitch are heroes, it was unbelievable from everyone," Walters told Sky Sports. "We've done it the hard way, but we got there.

"I've got to take it in because these moments don't come around often.

"They've [O'Neill and Keane] been excellent throughout the whole campaign. It's been a long, hard two years but finally we got there."

Ireland's achievement is particularly impressive given they were fourth in Group D with four matches remaining and an excellent 1-0 win over world champions Germany sparked hopes that a play-off would not be required.

Defeat to Poland in their final qualifier meant that scenario was not meant to be, but Brady was more than happy to do it the hard way and finish the job in front of their home supporters.

"If you'd said we can take a play-off in front of our own fans then we'd have taken it," he said. "We did everything we needed to and now we're off to France.

"I think it's just Ireland as a whole, we never seem to do things the easy way. When things got tough we stuck with each other and ground out results."