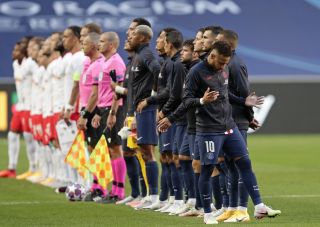 An Irish football pundit has gone viral for attacking the wealthy owners of Paris St-Germain and RB Leipzig on live television.

Former Ireland and Millwall striker Richie Sadlier was speaking on RTE’s coverage of the Champions League semi-final between the two teams on Tuesday.

The pundit turned his attention to the popularity of both teams, saying “they are very unpopular for very understandable reasons.”

'A marketing strategy for a drinks brand' and 'far worse' – Just why are #Leipzig and #PSG so unpopular? @RichieSadlier explains #RTESoccer#RTESport#UCLpic.twitter.com/ZAl1iEAadu— RTÉ Soccer (@RTEsoccer) August 18, 2020

In a clip which has been watched two million times on Twitter, Sadlier continued to address the subject for 60 seconds.

“I think one way of looking at Leipzig from abroad is you think ‘young manager, really energetic style of football, lovely story, they’ve come from nowhere in a very short period of time,” he said.

“But, if you look at how they’ve done it, they’ve – whatever word you want to use – they’ve either sidestepped or trampled over the membership rules that are treated very seriously in German football.

“Everyone in Germany is wishing them failure because if this model does well you can think ‘who’s going to follow them?’ It’s basically a marketing strategy for a drinks brand. That’s what this club exists as.

“And PSG, far worse is they’re run by a regime which faces allegation of anything from torturing journalists to imprisoning gay people (and) a host of other human rights abuses.

“So if you approach a game of football and see the result as a vindication or a validation of the behaviour of the owners or of the club, maybe this is not the game for you.”

Qatar Sports Investments, funded by the oil-rich state of Qatar, completed their takeover of French champions PSG in 2011 and have transformed them into one of the world’s wealthiest clubs.

One Twitter user replied to the clip: “Great to see a pundit brave enough to highlight the real issues”.

Best of all, nobody will remember I tipped Leipzig to win beforehand https://t.co/Syr3KcHQhp— Richie Sadlier (@RichieSadlier) August 18, 2020

After the clip had gone viral, and PSG had beaten Leipzig 3-0, Sadlier tweeted “Best of all, nobody will remember I tipped Leipzig to win beforehand”.