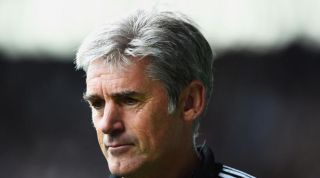 The hosts took the lead just before the break through Adam Lallana's first goal in a Liverpool shirt, only for Saido Berahino to level from the spot 11 minutes after half-time.

Jordan Henderson's effort just after the hour clinched the win for Liverpool, who were made to work hard for the three points by Irvine's men.

And the Scot believes his side were hampered by a poor first-half performance, suggesting they needed greater self-belief and confidence on the ball.

"I felt as if we probably deserved something out of the game and I was actually a bit disappointed by the way we used the ball in the first half," he said.

"I felt we needed to show a bit more self-belief, a bit more courage when we were in possession of the ball.

"Obviously the goal just before half-time is disappointing because it changes the mood in the stadium, but the biggest disappointment for me was that we weren't brave enough and we didn't use the ball well enough."

"I thought we really took the game to Liverpool for large periods and my biggest fear was that we might get done on the counter attack, which is not something you expect to say too often when you're at Anfield."

The visitors were rewarded for their efforts after the break in controversial circumstances, when referee Michael Oliver awarded a penalty for Dejan Lovren's foul on Berahino, despite replays suggesting the challenge may have been outside the box.

And Irvine admitted his side may have got lucky with the decision.

"My first reaction was to ask John Moss [the fourth official] if it was inside the box," he said.

The result brings an end to a run of three straight wins in all competitions for West Brom, who host Manchester United after the international break.