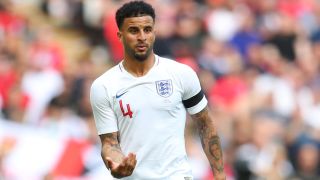 England defender Kyle Walker feels moving to centre-back from his preferred position on the right for the national team is a "step back".

Walker is set to be used in central defence by Gareth Southgate, whose men will face Belgium, Panama and Tunisia in Group G.

The Manchester City star has developed into one of the leading right-backs in Europe, having starred in the Premier League in 2017-18.

Walker, 28, accepted he was ready to play whatever role was required for England, although his preference is right-back.

"Is centre-back my preferred position? Of course not. I want to play right-back," he told UK newspapers.

"I have worked my whole life to get to where I am now in a World Cup squad, and to showcase my talent on the World Cup stage, playing in my position.

"But I'm a team player. I will do anything for the team. If that means the gaffer thinks to help the team out I should play there I am all for it.

"I have been playing professionally since I was 18 at right-back. To get to your first World Cup and probably not be playing in your preferred position where you want to showcase your talent is not disappointing but it is like, 'OK, it is a little bit of a step back'."

Walker made the move to City from Tottenham last year in a deal reportedly worth £45million.

The 35-time England international paid tribute to City manager Pep Guardiola for his development and helping him adapt to a central role.

"The position I am playing now for my country, at right centre-half, could I have played it two years ago? Probably not," Walker said.

"It was comfortable for me because of the work I have done at Manchester City. My game has developed tremendously under Guardiola.

"He has taught me so much about the game: just managing the game, understanding the game, and knowing the players around you really.

"He doesn't really like to be overloaded in midfield so, if he does see that, then I tuck in so we go as a back three."