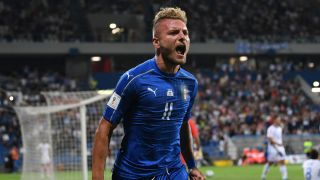 Italy offered an underwhelming response to their World Cup qualifying defeat against Spain but secured a top-two finish in Group G with a 1-0 win over Israel in Reggio Emilia.

Giampiero Ventura's men were outclassed in Madrid on Saturday, losing 3-0, but they would have been expecting a far simpler task back on home turf as they aimed to tighten their grip on a play-off place, eventually doing so through Ciro Immobile.

While Israel lacked Spain's quality across the pitch, they had the energy to match Italy for long periods and threatened on the break as they soaked up pressure in a turgid first half.

The pressure built after the interval, however, and Immobile - a scorer in a 3-1 Azzurri win in Haifa a year earlier - deservedly won the points with a fine 53rd-minute header.

This result takes Israel out of the running for next year's tournament in Russia, while Albania's 1-1 draw in Macedonia guarantees Italy at least a runners-up spot.

There is still work for Italy to do in the play-off race - and there remains an outside chance of toppling pool leaders Spain - as they must avoid ending the campaign as Europe's worst second-placed side, but they may well look back on this as a pivotal victory following the disappointment of their humbling at the weekend.

Italy tore forward inside the first minute and Andrea Belotti arrowed a right-footed shot just wide, but they soon settled into a patient passing game that rather lacked the same early cutting edge.

Daniele De Rossi - becoming his country's joint-fourth most-capped player - twice blazed high over the crossbar from a promising position and only the timely challenge of Andrea Conti halted Marwan Kabha's dangerous run into the area at the other end.

Gianluigi Buffon then came to the Azzurri's rescue as Almog Cohen curled a 20-yard effort towards the top-right corner late in the first half.

Finally, in stoppage time, Israel goalkeeper Ariel Harush was tested for the first time, but he blocked brilliantly from Lorenzo Insigne and then gratefully accepted a tame Belotti finish.

Italy continued to improve from the restart and Immobile should have buried his sixth of the campaign as he instead nodded wide in front of goal.

Immobile was then denied by Harush after a low near-post strike, but the same man quickly made amends as he directed Antonio Candreva's deep delivery back across the goalkeeper and into the top-right corner.

3 - Three of Ciro Immobile's six goals for Italy under Giampiero Ventura have been assisted by Antonio Candreva. Understanding.September 5, 2017

Harush was back at his best to keep out Belotti's header with a stooping save, before later scrambling across the goal line to block off Andrea Barzagli's route to goal.

Again the keeper shut down a frustrated Belotti, but his fine work counted for little as Israel's attacking threat waned and the hosts saw out the closing stages.

Their top-two place was confirmed when Aleksandar Trajkovski netted a late penalty for Macedonia against Albania, leaving Italy on the verge of a play-off place.