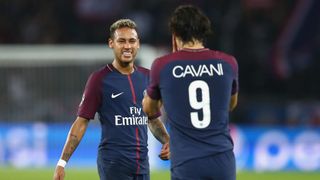 Paris Saint-Germain striker Edinson Cavani insists his row with Neymar over penalty duties has been settled.

Brazil star Neymar became embroiled in an on-pitch argument with Cavani over who would take a spot-kick in the 2-0 Ligue 1 victory over Lyon last month.

It was reported that PSG offered Cavani a €1million bonus to forgo penalties in future, while there were even suggestions Neymar demanded the Uruguay international be sold in the wake of the disagreement.

The duo appeared to have put any animosity behind them on Saturday as they inspired a 6-2 thrashing of Bordeaux, during which Neymar was congratulated by Cavani after converting from the spot.

The former Napoli forward claims the issue was blown out of proportion and has now been put behind them.

Speaking ahead of Uruguay's World Cup qualifier against Venezuela on Thursday, he said: "It's part of football. They're things that sometimes get amplified to something much bigger than they really are.

"They get settled in the dressing room. Everything has a solution. It's all fine now.

"The important thing is that we're fighting for the same goal."