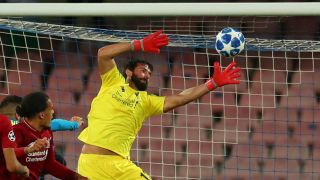 Jurgen Klopp believes Alisson was Liverpool's best player in Wednesday's 1-0 defeat to Napoli and feels it is only ever a bad thing when a team's goalkeeper stands out more than the rest of the side.

Liverpool came unstuck late on at Stadio San Paolo, as Lorenzo Insigne scored the winning goal for Napoli, who had been superior throughout.

The Reds were particularly blunt in attack and Klopp aired his frustrations with his forwards in a post-match television interview.

But in his news conference Klopp was eager to highlight his own mistakes and accepted that Alisson's standout display was an indictment on the performances of the rest of the team.

"I'm not 100 per cent sure why [Liverpool were so poor], but it is clear that we were," Klopp told reporters.

"The timing for our defensive movements was not good enough, we didn't close the space in the right moment, we didn't react in the right situation, and so they could play through.

Jürgen Klopp admitted 's performance was not good enough after watching his side lose 1-0 to Napoli. October 3, 2018

"We didn't create a lot of chances. The second half was not good enough. It's always a bad sign when you have to say your goalkeeper was your best player, but it was obvious tonight.

"A big part of that performance is my fault. I need one night to watch the game again, but it looked not like it should have looked."

In his pre-match news conference, Klopp referred to Ancelotti as a "smart fox" with respect to apparent mind games, but it was put to the German that his counterpart was actually more of a lion.

"Carlo Ancelotti is an outstanding manager, if you want to say he is a lion I have no problem with that," he added.

"We lost the game and it is quite difficult to perform like [Napoli] perform. I am pretty sure the reasons will be obvious and then we will sort that, but we were not good enough and normally if you are not good enough you lose games. That happened to us."

Liverpool failed to register a single shot on target during the match, something Klopp cannot remember happening before.

He said: "No attempts on target, I don't remember when that happened last time. I think we had a big part of that because we can play much better.

"We don't have a lot of set-pieces. No shots on target is not enough. They had a good game, we didn't, that's why they deserved the three points."