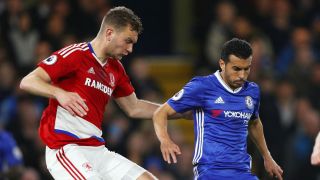 Middlesbrough captain Ben Gibson described the experience of being relegated from the Premier League as the lowest moment of his life, while Steve Agnew accepted his side's demotion to the Championship is down to their lack of goals.

Boro lost 3-0 at Chelsea on Monday, with Diego Costa, Marcos Alonso and Nemanja Matic scoring in a comprehensive win for the champions-elect, to relegate Agnew's team with two matches of the season still to play.

Gibson accepted Middlesbrough have failed to perform throughout the whole campaign as they return to the Championship after a short stay in the top flight.

"It's not just tonight, it's a full season," Gibson told Sky Sports. "From top to bottom we haven't been good enough. Players, staff, myself.

"The fans didn't stop singing, wherever we've been this season they've been the same. The fans deserve Premier League football and we have to find a team to do that. We have to reflect on what's gone wrong."

FT: Defeat at Stamford Bridge means are relegated from the May 8, 2017

Steve Agnew was only able to record a single win after replacing Aitor Karanka and the manager acknowledged a lack of firepower in front of goal has been one of the most telling issues for his side.

"We've had 36 games with two to go and it's been a tough season," Agnew told Sky Sports. "It's not just tonight, it's been a difficult season. It's a disappointing evening.

"We haven't scored enough goals and ultimately you have to score goals to win football matches."

Conte says he went to applaud the Middlesbrough fans after the game due to his respect for their reaction to their relegated team. May 8, 2017

Agnew refused to say whether or not he would like to stay on as Middlesbrough's manager as the club reflects on a joint-record fourth relegation from the Premier League.

"I think the most important thing is the football club, a terrific football club," he added. "It's not about my situation, it's about finishing the season well and making sure Middlesbrough can bounce back.

"It's about the football club and getting the club back to the Premier League."