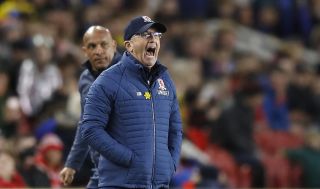 The last time Boro lost six games in a row was November 2000 when they were a Premier League team and Saturday’s 3-1 loss at Swansea left them four points outside the top six.

Boro did at least end almost six-and-a-half hours without scoring with a consolation effort from George Saville.

“I was really disappointed with the first half,” said Pulis. “I just thought the way we played it wasn’t until five minutes into the second half that we got hold of the game.

“Even then Swansea caused us problems on the break. Out of all the games we had left this season this was the one I was more worried about than all the others.

“Don’t forget they were a Premier League side last season. The players didn’t perform to the level they are capable of and they’ve got to be bigger and better than that.

“The players have just got to pick themselves up. We’ve had a good chat about it and it’s not about me believing we can make the play-offs, it’s up to the players.

“I think they believe they can do it and they were as disappointed as anyone else in the way they played in the first half. They didn’t perform to the level they are capable of and they’ve got to be bigger and better than that.”

To add to Pulis’ worries George Friend picked up a hip injury that could see him miss Tuesday night’s trip to Bolton.

New Swansea chairman Trevor Birch was at the Liberty Stadium to watch his first game since taking over from Huw Jenkins and he will have been impressed with what he saw.

“It’s not easy to create chances or score against Middlesbrough with how they defend, so I am very pleased,” said Swansea boss Graham Potter.

“We were excellent in the first half with our attacking play. We had a good understanding of what we were trying to do, we scored two good goals and probably could have added to that.

“Getting the third was important and it was more nervy than it needed to be at the end. Overall, though, we completed controlled the game, we were the better team and deserved the win.

“They don’t concede many and I thought some of our play was very exciting. It’s not easy when it’s your third game in a week, so congratulations to the players – we looked fresh, we counter-pressed well, we had energy and I really enjoyed watching us play.”