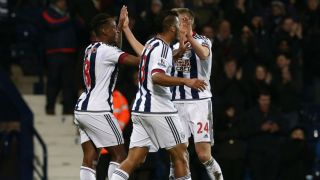 Saido Berahino said he is putting the past behind him after scoring the decisive goal in West Brom's 3-2 home win against Crystal Palace.

West Brom raced into an early lead thanks to goals from Craig Gardner and Craig Dawson before Berahino added a brilliant third - all in the first 31 minutes.

Connor Wickham scored twice as Palace mounted a second-half comeback but West Brom held on for back-to-back Premier League wins that sends them above Palace to 13th in the table.

"I can only thank God," Berahino told BBC Sport after scoring his first Premier League goal since October.

"I've been through a lot this season but I've put the past behind me. I was just out there enjoying myself.

"As a footballer you just want to go out and show what you’re about, that's what I've done today.

"I tried to contribute as much as I can. It was a really important win for us."

Berahino added that West Brom wanted to bounce back from exiting the FA Cup in the fifth round at the hands of Championship side Reading last weekend.

He said: "We worked really hard after defeat to Reading and came out in the first half, got the three goals, but we were disappointed to concede two in the second.

"We've been working hard at trying to link up, today we clicked and it's a good sign.

"You can see the strong character we have as a team."