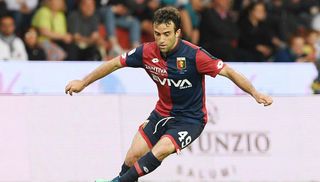 Former Manchester United and Villarreal forward Giuseppe Rossi insists he will not give up on the game despite suffering five serious knee injuries.

The 31-year-old managed one goal in 10 appearances for Genoa last season, and is currently a free agent following the expiry of his contract.

After four productive years in LaLiga with Villarreal between 2007 and 2011, Rossi was struck down by a torn anterior cruciate ligament and has been battling a succession of knee problems ever since.

Spells at Fiorentina, Levante and Celta Vigo preceded his time at Genoa but despite making no more than 19 league starts in any campaign since 2011-12, Rossi is giving no thought to stepping away from football.

"I sacrificed too much to do that," he told BBC Sport.

"I love this game so much, I could never leave it and say it is done. Nothing can take football away from me, it's my little baby, my love.

''Every injury has its own story - it took something away, if it's a World Cup, the European Cup, or a big transfer.

"But the dream doesn't stop and I am here today living the dream that I have always wanted to and keep trying to gain what I lost."