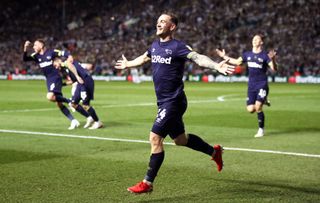 Derby substitute Jack Marriott scored twice to help fire his side into the Sky Bet Championship play-off final after a 4-2 victory at Leeds.

Marriott scored moments after stepping off the bench in the first half to make it 1-1 on the night and struck his second in the 85th minute to clinch Derby a 4-3 aggregate win.

Derby, trailing 1-0 from the first leg, had fallen behind to Stuart Dallas’ opener, but after Marriott’s equaliser they stunned Marcelo Bielsa’s side with second-half goals from Mason Mount and Harry Wilson, from the penalty spot.

Leeds, roared on by their partisan fans, hauled themselves level through a fine second goal from Dallas, but Marriott had the last word in a rip-roaring play-off semi-final, which saw both sides finish with 10 men.

United defender Gaetano Berardi was sent off for his second yellow card in the 78th minute and Derby’s Scott Malone received his second booking in the final minute.

Derby made it quickly apparent that they intended to make a real fist of it and came out of the blocks matching fire with fire.

Tensions boiled over in the 20th minute when Derby left-back Malone was booked for shoving over Pablo Hernandez as the Spaniard tried to take a quick throw-in.

Derby were dealt a blow in the 24th minute when, after all their good work, they conceded to fall behind 2-0 on aggregate.

Kalvin Phillips’ free-kick came back off a post and Dallas turned home the rebound from close range.

Leeds almost went 2-0 up on the night when Mateusz Klich’s shot was deflected on to the crossbar.

Derby refused to roll over though and Mount’s looping header hit a post before substitute Marriott struck the equaliser moments after replacing Duane Holmes.

Leeds goalkeeper Kiko Casilla and skipper Liam Cooper collided going for Mount’s flick-on and Marriott was left in the clear to seize on the gift and turn the ball home.

Leeds were rattled and were caught cold again soon after the restart when Derby levelled the tie.

Wilson fed Mount in the box and despite stumbling, he managed to lift his shot over Casilla and send the travelling fans into raptures.

Leeds responded as their fans turned up the volume and goalbound efforts from Phillips and Hernandez were both blocked.

But Derby refused to buckle and turned the tie on its head in the 58th minute.

Referee Anthony Taylor awarded a penalty for Cooper’s tug on Mason Bennett and Wilson calmly converted from the spot.

Now it was Leeds who had to dig deep and they obliged by levelling the tie again four minutes later.

Klich and Dallas combined down the left and the latter turned inside and fired a peach of a shot inside the far post.

62' GGGGGGGGGGGGGGGGGGGGOOOOOOOOOOOOAAAAALLLLLLL!!! STUART DALLAS GETS #LUFC BACK INTO IT!!! 2-3 pic.twitter.com/Q3EOYE74S9— Leeds United (@LUFC) May 15, 2019

With the last 10 minutes approaching the game took another twist.

Berardi kicked out at Bradley Johnson after the pair had tussled in midfield and was shown his second yellow card.

Derby made Leeds pay. Moments after Wilson’s shot hit Casilla’s right-hand post, Richard Keogh squared the ball for Marriott in the area and the striker lifted the ball over the Leeds goalkeeper to make it 4-2 on the night to the visitors.

Derby made history by becoming the first side to win a second-tier play-off semi-final after losing the first leg at home and they will face Aston Villa on May 27.