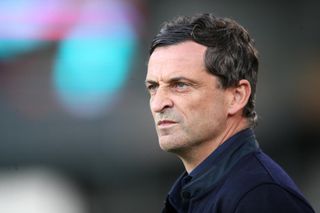 Hibernian manager Jack Ross was frustrated after his side allowed a winning position to slip through their grasp with a 1-1 home draw against Livingston.

The Easter Road men took the lead four minutes after the break when Christian Doidge netted his 17th goal of the campaign.

However, Aaron Taylor-Sinclair levelled things up for Livingston six minutes later and Hibs were left to rue Scott Allan’s missed penalty before the break.

A victory would have taken the hosts above their visitors in the Ladbrokes Premiership into fifth and, with Aberdeen losing and Motherwell only drawing, Ross admitted it could have been a better day’s work for his below-par team.

Ross, who felt his team could have been awarded a second penalty for handball late in the game, said: “It was a frustrating afternoon for us, not because it’s a draw but because of the way the draw came around. Having given ourselves a chance to go ahead in the game that we didn’t take, and then going ahead and being pegged back.

“I don’t think we were great today but I still think we dominated most of the ball and most of the territory and when you add that in it’s frustrating we don’t take more from the game.

“I tend not to get too worried about other results because the frustration is because of our performance and result.

“That’s what I look at first and foremost because it’s the only thing we can affect and try to control.

“The other results add to that a little bit because of the way the draw came about. “

Livingston counterpart Gary Holt, meanwhile, was thrilled to have seen his team overcome losing the first goal to take what could prove a valuable point in their bid for a top-six place.

He said: “I’m absolutely buzzing, to go a goal behind and to show the character and desire.

“We could have been overrun at times, especially when you go a goal behind and they get a lift and the crowd gets behind them.

“But I thought we stuck to our game-plan and in the second-half we created some really good chances.

“To show the character, coming from behind, speaks volumes about the boys and I’m buzzing for them, to be honest.

“I’m really delighted for them because they stood up to the test really well.”