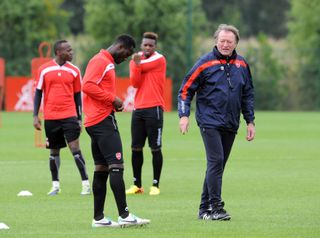 The Ligue 1 strugglers came from behind to draw 2-2 at Rennes on Saturday to collect just their fifth point in 10 league games.

Unsurprisingly, Valenciennes are bottom of the table and sacked head coach Daniel Sanchez on October 8 after their poor run.

Jacobs was positive but said it was the first of '28 finals' his team would play to finish the season.

"It is true that there were a lot of positives to come out of the match," the Belgian coach said.

"We managed to get a point away from home after being 2-0 down. That is positive, but we mustn't systematically believe that we are now safe.

"It is one small step. There are still 28 finals to be played. We should be happy but not euphoric. We need to keep our feet on the ground because our situation has not really changed."

The next fortnight could be decisive for Valenciennes, who meet teams just above the drop zone in Evian TG and Ajaccio.

But Jacobs will have to deal with the matches without central defender Lindsay Rose, 21.

"His knee is still swollen, but one thing is certain – the injury is serious and he will be out for a long time," Jacobs said.

"He has injured the anterior cruciate ligament and a meniscus."

Former Anderlecht and Copenhagen coach Jacobs will introduce a monthly meeting with four players to ensure his squad are happy.

"Once a month, it is a good idea to have contact with several players rather than just speaking to the captain, who is the representative of the dressing room," Jacobs said.

"The whole squad will designate four players who will all have a role to play. There will be a young player, an older player, a Frenchman and a foreigner.

"These players will not have any special status. It is something I always do to make day-to-day life easier. Those who are on the committee will have no influence on tactical choices."