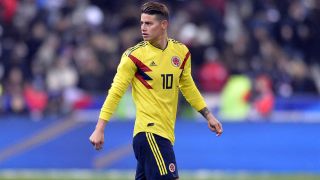 Colombia star James Rodriguez hopes he can lead his team into at least the World Cup semi-finals in Russia.

The South Americans are coming off their best result at the showpiece tournament, having reached the quarter-finals in Brazil in 2014.

James, 26, believes the nation can produce even better later this year after being drawn with Poland, Senegal and Japan in Group H.

"I want to have a good World Cup and help my team-mates get to the semi-finals or the final – why not?" he told bundesliga.com.

James has enjoyed a fine first season at Bayern Munich after joining the Bundesliga giants on loan from Real Madrid.

Asked about Colombia potentially meeting defending champions Germany in the World Cup final, James was open to such a clash.

"But that's a long way away, we need to take things step by step."