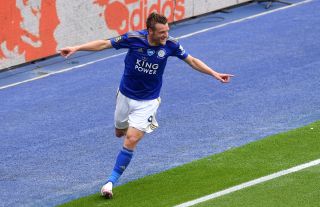 Jamie Vardy scored his 100th Premier League goal as Leicester got their challenge for Champions League football back on track with a first victory since the restart against Crystal Palace.

Vardy, stuck on 99 goals since his double in a 4-0 victory over Aston Villa in the final match before the lockdown, netted Leicester’s second and third in a 3-0 win after Kelechi Iheanacho had opened the scoring.

The former Fleetwood striker, who became the first £1million signing from a non-league club when he joined the Foxes in the summer of 2012, finally reached the milestone in his 206th game.

More importantly for Brendan Rodgers’ side, the much-needed win kept Leicester third in the table after pressure had been building with resurgent Manchester United and Chelsea having significantly narrowed the gap in recent weeks.

The Foxes looked bright early on. Marc Albrighton crossed from the right but Iheanacho could only glance his header wide as he stretched to make contact.

Leicester were dominating possession, with the game being played almost exclusively in Palace’s half. They came close to making their superiority count when James Justin crashed a 25-yard effort against the crossbar.

Rodgers’ side had a two-against-one opportunity in the 18th minute but Mamadou Sakho did brilliantly to cut out Vardy’s cross as he tried to find strike partner Iheanacho inside the penalty area.

Palace threatened for the first time just after the half-hour mark as Luka Milivojevic’s curling free-kick dipped narrowly wide of the top corner.

Leicester went ahead five minutes into the second half. After good work down the left involving Albrighton and Ayoze Perez, Youri Tielemans swung a cross into the six-yard box where Iheanacho was arriving to guide the ball home.

Vardy had a chance to quickly double the lead but, from a tight angle, fired his shot into the side-netting.

Goalkeeper Kasper Schmeichel was worked for the first time after an hour and did well to smother Gary Cahill’s goalbound header.

The moment Vardy had been waiting for arrived in the 77th minute. A defensive error from Palace saw Sakho mis-control Vincente Guaita’s short goal-kick, slipping and gifting the ball to Harvey Barnes.

Vardy sensed the danger – and history – and raced into the box where Barnes teed him up for a simple tap-in. Of Vardy’s 100 goals, few would have been easier.

Of the 29 players to become Premier League centurions, only Ian Wright (28 years 286 days) made his debut in the competition at an older age than Vardy (27 years 232 days).

Palace tried to get back into the match but Schmeichel was never really troubled and Leicester caught them on the break in stoppage time, with Barnes again putting Vardy through on goal and the striker coolly clipped his finish over the advancing Guaita.