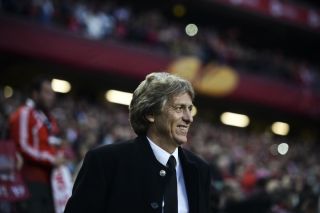 The Portuguese champions produced an impressive performance at the Estadio da Luz on Thursday, overcoming Juve 2-1 to hold a slender advantage ahead of next week's return leg in Turin.

Benfica stormed out of the blocks, taking a third-minute lead courtesy of defender Ezequiel Garay, who headed past Italian goalkeeper Gianluigi Buffon.

The home side dominated for the remainder of the first half but were eventually pegged back in the 73rd minute, when Carlos Tevez wriggled his way through the penalty area.

However, Benfica hit the front with six minutes remaining after substitute Lima unleashed a powerful drive inside the area.

"The tie is still open, but we're in a stronger position in Turin because we won.

"We knew that we were facing a great team and even while being defensive Juventus usually score goals.

"We had to be perfect defensively and came close to achieving that. We only had a few difficulties on the Carlos Tevez goal, as that was great individual play.

"It was a spectacular game between two great teams and the first Juventus defeat in this Europa League. I think both sides showed what they can do and it was worthy of a Champions League tie."

Benfica reached the final of last year's competition, only to be beaten 2-1 by Premier League giants Chelsea at the Amsterdam Arena.