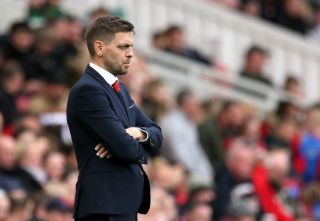 Woodgate only took over in June from Tony Pulis, but Boro have still not won away all season and last won a match over a month ago.

The struggling Teessiders have won just twice in 14 games in all competitions this term, with former England international Woodgate feeling the heat.

A battling point for Danny Cowley and his improving Huddersfield side means they are now five games unbeaten in the league, but the hosts missed the chance to leapfrog Boro in the table and climb out of the relegation zone.

Boro skipper Daniel Ayala came within a whisker of giving the visitors an eighth-minute lead, but his close-range header from Paddy McNair’s free-kick flew over the bar.

At the other end, England Under-21 international Trevor Chalobah teed up leading scorer Karlan Grant, but the striker headed over from a good position.

League debutant goalkeeper Ryan Schofield nearly gifted Boro the opener when he inexplicably missed his attempted punched clearance from a corner and, thankfully for the hosts, the ball struck Ayala in the six-yard box and ricocheted to safety.

Grant then had an excellent double chance to put the Terriers ahead, but he was thwarted on both occasions.

His curling free-kick was well-saved by keeper Aynsley Pears, also making his league debut, before having a shot blocked in the box by George Saville.

Midfielder Lewis O’Brien blazed over the bar with a powerful left-foot strike as the home team forced the pace.

Ashley Fletcher, who came through the Manchester United youth system, did well to turn his marker and dragged a right-foot shot inches wide of Schofield’s right upright seven minutes before the break.

And Marvin Johnson had a shot charged down in the box as Boro tried to make an elusive breakthrough of their own.

French winger Adama Diakhaby came the closest to breaking the deadlock on the cusp of half-time, but his left-foot free-kick curler flew agonisingly wide of the right post.

McNair blasted over in injury-time but Boro should have scored five minutes after the restart only to see Schofield pull off a wonderful one-handed save to deny McNair from close range.

The rebound fell perfectly for Fletcher but, with the goal at his mercy h somehow shot over from six yards.

Grant had another chance as the Yorkshire hosts countered, but this time he blazed over from distance.

Boro midfielder Marcus Tavernier cut inside his marker and rifled a thunderbolt shot wide of the target just after the hour mark, while O’Brien shot over from distance for Huddersfield.

Substitute Juninho Bacuna came off the bench and had a chance to score for the fourth game running, but he shot well over from the edge of the box.

Boro sub Britt Assombalonga went close to scoring late on but his close-range effort was well blocked by Jaden Brown as both sides drew a blank.