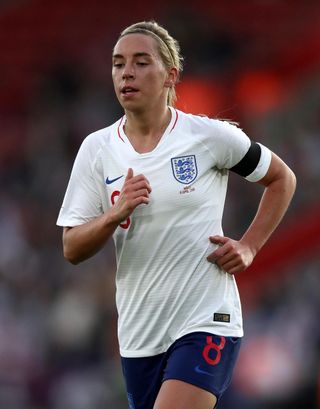 Arsenal midfielder Jordan Nobbs has been recalled to the England squad for the first time since recovering from a serious knee injury.

The 26-year-old, who has 56 senior caps to her name, was a certainty for Phil Neville’s World Cup group before rupturing knee ligaments in a Women’s Super League game against Everton last November.

She made her WSL return in a 2-1 win over West Ham on September 8.

The Lionesses have two friendlies coming up, hosting Brazil at Middlesbrough’s Riverside Stadium on October 5 before travelling to face Portugal three days later.

Neville has also taken the opportunity to recall fit-again trio Alex Greenwood, Jill Scott and Fran Kirby – who all missed the recent games against Belgium and Norway through injury.

“To get Jordan back is really exciting,” Neville said.

“Her mentality has been great. We have kept her involved in most things we have been doing. We have been in constant contact with her.

“From the moment she was diagnosed, her focus was to get back into that England shirt as soon as possible.

“Her enthusiasm and the performances she has had so far this season… she played 90 minutes and I watched her at Manchester United – that player we have become accustomed to and we missed at the World Cup has got back up to speed immediately.”

After losing to Norway and drawing with Belgium in the last international break, Neville conceded his side were suffering the after-effects from their run to the World Cup semi-finals.

“First and foremost they were poor results and we were disappointed with the performances and we can’t hide away from that,” he said.

“There was a hangover and the hangover was shown in the performances.”