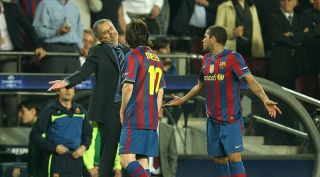 Jose Mourinho has praised Lionel Messi for making him a better coach.

The Portuguese, who has been out of work since leaving Manchester United last December, spent three seasons in charge of Real Madrid between 2010 and 2013.

Mourinho faced Messi's Barcelona side 13 times during that period, and he has also came up against the Blaugrana while at the helm of Chelsea and Inter.

And Mourinho believes the experience of facing Messi was beneficial to him as a manager.

"I always say that I owe so much to my players, as to those who have not been my players and have created problems for me," he told EFE.