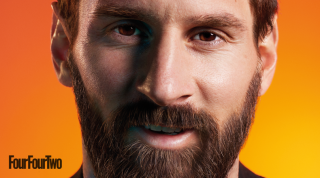 Please note: This feature originally appeared in our 25th anniversary issue this summer. Subscribe now for just £2.40 an issue

It’s not easy to interview Lionel Messi. He’s very well protected, for one, by people who know the strongest image of him is what he does on a pitch, not what he says off it.

Use the same principle to see why you never hear Kate Moss speak or David Beckham offer controversial opinions. It’s better for them to let their image and talent talk, and then let others fill in the blank canvas.

Messi is probably the most ungenius-like genius to have ever graced this sport. He doesn’t strut like Ronaldo or swagger like Best, and doesn’t have the cool magnetism of Cruyff or the compelling allure of Maradona. Yet he does something spectacular week after week: he turns games and leaves you gasping.

Messi also knows that in today’s rolling global media age, what he says will invariably be twisted to create a story. Or even what he doesn’t say. When he picked out Liverpool, Manchester City, Juventus and a young Ajax side as those to watch ahead of the Champions League quarter-final draw last season, some Manchester United fans were affronted that he hadn’t mentioned them.

FFT has a long history with Messi. He first came to our attention in 2004 when Arnau Riera, his captain at Barça B, tipped us off. He thought the floppy-haired youngster had what it took to be better than any player he’d ever seen.

The first interviews with Messi were quaint in their organisation. We emailed his father and he replied offering some help.

The young Messi, hiding behind a heavy fringe, was like Wayne Rooney at a similar age when dealing with the press – both working-class lads who just wanted to play football rather than talk about it. But Messi’s father knew his son was a diamond, and that his boy would have to speak to journalists. If there were any issues, then I was to email Messi senior.

It wasn’t long before Barça stepped in to protect their asset, but he was usually up for being in FFT and would always ask questions about the Premier League once the tape recorders were turned off.

In FFT 137 (January 2006) Ronaldinho ‘introduced’ Messi after he’d settled alongside him in the team. Barça were inundated with interview requests. They declined most, but FFT were lucky enough to get several sit-down interviews with the rising star from Rosario.

Messi was pleasant, polite and so shy that he was asked to hold the recorder closer to his mouth so that his words could be picked up. He mumbled: “Despite being young, I don’t go out much. I listen to music, I watch TV, I use the internet, sleep some good siestas or play PS2 on the sofa. Perhaps I can start an English course – I want to learn English because it’s useful.”

Messi never did master English but he never stopped learning, on or off the field. Barça team-mates Deco and Sylvinho were key in shaping his personality. The boy among men took his media cue not from more outspoken players like Samuel Eto’o or the cerebral football fanatic that is Xavi, but the polished, insipid platitudes of David Beckham.

In 2008, another interview was set to take place the night after a game when Barça fans sang his name more than any other player and a large Argentina flag appeared above the south goal, thanking the country for two things: Quilmes beer and Messi.

Messi looked bored. So how to get his interest?

I’d been at the Copa America in Venezuela that year and seen a single USA fan stand up and sing the Star Spangled Banner in a packed stand surrounded by 50,000 Venezuelans, who were rooting for Argentina and hated the Americans. “Did you see it?” said Messi. “Incredible, no?” and from there we were on a roll.

In 2009, I was asked to present him with the FFT Player of the Year award, and travelled to Barcelona’s training ground by tram with a smart glass trophy in my bag. Security searched it on the way in and asked, “What’s this?” A prize for Messi. It was allowed to pass unremarked. Trophies for him arrived as often as milk.

A few months later, we spoke to Messi ahead of the World Cup. There was some small talk. He asked how Manchester City had been able to buy Argentina team-mate Carlos Tevez, and what United fans thought of him leaving.

In 2011, he drove past me in the street of Rambla Catalunya while I was with the aforementioned Riera. We knew it was Messi, as kids mobbed his luxury SUV.

Later that year, we were about to talk to him when he’d finished making an advert by the side of a pitch overlooking Barcelona and the Mediterranean. Messi was about to say hello when he spotted a football and couldn’t resist booting it into the net 30 metres away. Except ‘boot’ doesn’t do it justice. He nonchalantly kicked the ball as if curling it around a non-existent wall into the top corner of the net. Obviously. It was handy that the theme of the interview was about the art of goalscoring.

In 2017, he agreed to be guest editor of FFT and we spent time with him on a rare rainy day in Barcelona. He was polite, friendly and modest. While Xavi enjoyed lengthy discussions with journalists, Messi is different. He’s a man of fewer words, but was engaged by the 20 images we’d chosen of his career to date and there were some surprises. His eyes lit up when he spotted himself with Sergio Aguero celebrating Olympic gold with Argentina in 2008. The images which featured occasions less obvious than any Barça treble wins or Bernabeu hat-tricks clearly meant a lot to him.

Messi will likely be the player of the 21st century, and is arguably the greatest ever. FFT has been with him every kick of the way – and the scary thing is that there’s still more of the same to come.

QUIZ Can you name the 50 most recent Premier League managers?