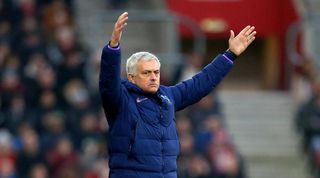 Jose Mourinho believes Wolves and Sheffield United are both top-four contenders this season.

The Tottenham boss saw his side move to within four points of the final Champions League qualification spot - currently occupied by Chelsea - after a 2-0 victory over Manchester City last weekend.

However, Sheffield United are just points adrift of fourth place having played one game more than their fellow challengers.

And Wolves are only six points behind Chelsea as they too target a place in next season's edition of Europe's leading competition.

Mourinho also praised his players for their positive attitude and mindset in the last few weeks.

"We as a team in the last few weeks are showing a certain mentality. This season has been hard for them. Even before I arrived," he added.

"But the way the team has fought has made me even prouder of them. People like Son [Heung-min] and Lucas [Moura] going to their limits and giving absolutely everything. Injured players trying to give everything. The spirit is amazing."